Outstanding filly Perfect Sakura put up a remarkable performance to record her 37th career win in the Triple Crown Stayers Championship for 3yo fillies in what was the highlight of the third day in the Digiturf Championship Series. 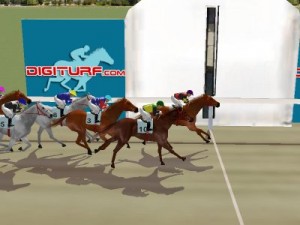 Owner Mudflaps’ charge was hot favorite for the race but had to overcome a difficult passage to get the better of Chrisman’s Serenity Moon.

Luck in running was to feature heavily on day two with similar stories in both the fillies’ and colts’ divisions of the Juvenile Stayers Championship events. Paddy O’prado almost claimed the honors for Sunpass Racing, having had the run of the race but was just edged out of it close home by race favorite, Priscus Of Rome owned by Worldwater Stables and ridden by Landon Webster. The filly, Boost Your Stable, also showed class for owner Oto Stables to deny champion jockey Jack Ford’s mount, Skinout.

Unfortunately, the same could not be said for favorite To The Rescue in the Triple Crown Stayers Championship for 3yo colts. The breaks never came for Foggydan’s stable star and he did extremely well to finish second under Robbie Pierce to Whymea Farms’ Smooth Sailin.

Owner Chrisman was on the mark again when his Crown Son added to his tally for the week in what appeared t obe a shade cosy victory in the Arlington Gold Cup for 4-7yo colts. Tri M Fent completed a one-two in the closing fillies’ event with Ferocious Liz finishing a half length to the good of Royal Empress.

Welcome to – The Syndicate –