The new season at Digiturf is underway and already we’re looking forward to the Championships as the first of the qualifiers take place. 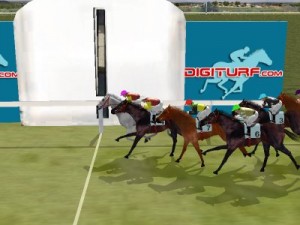 On Sunday, the Classic contenders took to the American dirt track for the Kentucky Derby Classic Qualifiers over 1800m. Hot favorite, Domination Abi lived up to expectations in the fillies’ event for trainer Mckinleys, coming home ahead of Bigbob’s Ap Assasin but performance of the day goes to Karl Khoder’s Secret Legend who won a shade cosily under jockey, Claude Virenque. This win in what was a $200 added event took the winner’s career earnings to over $10,000.

Monday saw the turn of the stayers in the Arlington Gold Cup Qualifiers for 4-7yos. The colts division was run on the dirt at the American track where the ground was riding fast and Worldwater Stables’ Operation Ivy made it clear he had done well from three to four when winning in taking fashion from Bigbob’s Ace of Pace.

In Hong Kong, where the turf was firm in the fillies’ equivalent, trainer Foggydan dominated as his two runners fought out the finish. The pair battled quite a duel all the way the line with Defiant’s Double just edging out Dame Defiant at the post.