With Wild High a scratching, a select field of six took to the sloppy dirt track at Saratoga yesterday for the feature race on the card, The Amsterdam (Grade 2) over six and a half furlongs for three year olds with a purse of $150 up for grabs. 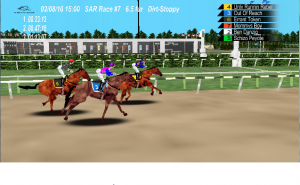 With nine consecutive in the money placings coming into the race, all of which were in either stakes or graded stakes races, Unlv Runnin Rebel was the punters’ choice and the Excellent Gigi colt did not disappoint his supporters. Prominent throughout, Maverick Racing’s charge fended off all challenges before drawing away in the final furlong. This well-earned success came in a time of 1:19.93 with Out Of Reach and Errant Token taking minor honors.

The other Graded race to take place yesterday was the Royal North Stakes (Grade 3) over six furlongs for three year old and up fillies and mares at Woodbine. The turf course was riding firm at Woodbine and this allowed Jroc Racing’s Hott Pants to scoop the lion’s share of the $150 purse in an event record time of 1:08.82. Steel Reward and Consuelo followed the five year old home in the eight runner affair.

Gentleman Back To Form In Derby Qualifier