Attention today falls on the virtual tracks at Newturf, where three Golden Races took place. The first event to take place was the Picasso Derby over 1600m for yearlings. A field of twelve runners took part and the honors went to Midday. The Northug colt got the better of Karem de Qer in a blanket finish, for owner Karl.

Ten runners went to post for the feature hurdles race of the day, the R.Moore Derby over 2200m for five year olds which took place at the Punters Meeting. The colt, Plenty Of Muraille came out on top, ahead of the mare, Jumpeuse de Trefle with Pantin des Murailles back in third. All runners successfully negotiated the course. 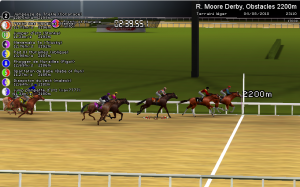 Performance of the day went to the Miche02 owned colt, Vlan Du Lac in the Group 2 Allez France Derby, also over 2200m for five year olds.  Long time leader, Kestrell du Tosc looked as though he might have done enough but could not quite contain the late surge of Vlan du Lac. The offspring of Blason Celebre won in a time of 2:25.06.