Highlight of the virtual horse racing world yesterday came at Horse Racing Park, in the shape of the Sorrento Stakes (Grade 3) which took place over six and a half furlongs for two year old fillies with $150 added to stakes. 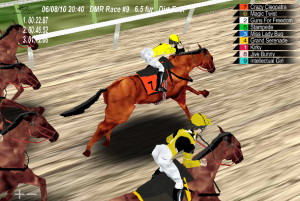 The feature event was run on the dirt at the Del Mar course for which the groend was described as riding fast. Two fillies, Crazy Cleopatra and Miss Lady Bug were carrying a penalty for winning a Grade 3 race previously, within the last three months. These two also had arguably the best form on offer and were to feature prominently in the race itself.

Stampede was first out of the gate but Crazy Cleopatra was always front rank and it was the Riggins Racing owned filly who was to prevail. She took over at the head of affairs plenty early enough and despite briefly surrendering the lead, the Salmagundi filly came again and shrugged off the opposition to win going away by a half at the wire. Ken Allan’s Magic Twist took second with Miss Lady Bug back in third. Early leader Stampede faded into fifth.

Crazy Cleopatra  was completing her second Grade 3 victory in succession from just three career starts to date, having won The Schuylerville last time out by a nose.

Chine Set To Shine In Starluck