All Too Easy For Annie In Hirsch

The virtual racetracks at Del Mar and Saratoga were the scenes of the main events from Horse Racing Park on Saturday, each staging a Grade One event. 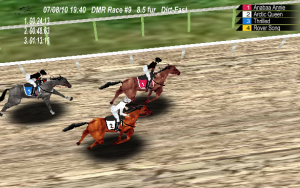 The biggest purse of the day came in the shape of the Hirsch Stakes over 1mile half a furlong on the fast dirt at Del Mar with $300 up for grabs. A little disappointing then that only four went to post but they included the progressive mare Anabaa Annie, a Grade 2 winner over this trip the time before last but who had faded over slightly further in her only previous attempt in this class.

This time, Anabaa Annie made no mistake, sitting a couple of lengths of pacesetter and stablemate, Thrilled before moving up and win going away from eventual second  Arctic Queen. The time was nothing special, as you might expect in a small field but there may well be more to come from Dynark Stables’ mare.

Over at Saratoga where the ground was also riding fast, the feature event, The Test (Grade 1) was a much more competitive affair but was won a shade cosily by proven Grade One performer Sparkling Wine, owned by Harrowden. The filly came home two lengths clear of her nearest pursuer, Fair Charmer in this $250 race for 3yo fillies over seven furlongs in a very respectable 1:22.13.

Max Marks Your Card – 24th May