Friday at Digiturf was a chance to see the best of the three year old sprinters in action on the turf  in Australia for the colts and on the dirt in America for the fillies, in the Triple Crown Sprint Qualifiers over 1200m. The ground was lively for both events. 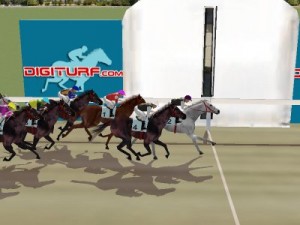 Worldwater Stables’ Cherry Blizzard notched his fifth career win in eighteen starts when getting the better of a tussle with Chrisman’s lightly raced colt AP Devil Dawg in the first of the two $200 added Championship Qualifiers. The form looks decent with Jekegr Stables’ Rumblin Ryan back in fourth place, giving it the appearance of solidity.

Nine runners went to post in the fillies’ division but it was dominated by a single owner in the shape of Cepat Kaya. A relative newcomer to Digiturf who looks to have invested heavily, his pair had the finish between them with Asian Diva mastering stablemate Fancy Diva close home. The third and fourth home, Flawless Jewel and Frost Line had the run of the race with no excuses and so it could be that the first two are above average even in this high grade.

In the Saratoga Sprint Qualifiers for 4-7 year olds, Chrisman’s Roosters Tango outpointed Whymea Farms’ Jetting Judy over 1000m on the American dirt track while prolific scorer King Domination added yet another win to his total when beating Irish Cream and Golden Lineage. Judged on this performance, Paris House’s Golden Lineage appears to have developed adequately from three to four years and should have another bumper season ahead.

Bowser The Choice In Dawn Run