Sunday was a big day at HorseRacingPark.com with no fewer than four graded stakes taking place on three different virtual racetracks, two at Saratoga including the Grade One Vanderbilt Handicap and one each at both Del Mar and Woodbine. 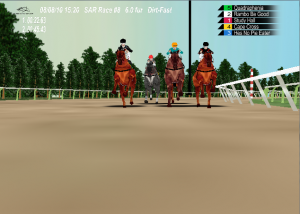 The six furlong Vanderbilt produced a tight finish with a proverbial blanket sufficient to cover the five runners at the line. The eventual winner, Study Hall who has been a revelation having progressed through the ranks from claiming races, undoutedly benefitted from his inside draw.

Hugging the inside rail the entire way round, Dynark Stables’ colt was able to take advantage of the shortest route. Passed in the straight first by Quadraphenia (who looked like a return to shorter should suit) and latterly by eventual third, Rambo Be Good, Study Hall had reserved enough to nose ahead at the wire, securing his first graded stakes win.

Dynark Stables was completing a quick graded stakes double on the Saratoga card after their Catch The Fever had won the previous race, the Grade Two Honorable Miss Handicap for three year old and up, fillies and mares. Catch The Fever had sat off the early pace while El Primero Rodeo’s Marcelina made a bold bid to make all under jockey J K Desormeaux. Although Marcelina stayed on well, Catch The Fever got up in a last gasp surge.

Up at Woodbine, their feature race of the day, the Seagram Cup Stakes (Gr3) saw Sanny Village’s Pumpillian comfortably secure the one mile, half furlong event for the second time in succession. The five year old won by a tidy two lengths in a race record time of 1:41.60.

Completing the quartet of graded events was the Best Pal Stakes (Gr2) for two year olds over six and a half furlongs on the dirt at Del Mar. The race went to Alberta Rose Stables’ Lindor in a time of 1:18.51, beating Pan Farms’ Sarahs Zippy with Riggins Racing’s Coastal Jet taking minor honors.

No Soft Ground Concern For Choubezi