Looking a little deeper into the results from this past weekend’s racing from HorseRacingPark.com and you discover a whole new level of healthy competition. Away from the big money events, a new movement is slowly growing and making a name for itself – team of owners known as the O.F.V.B.A. 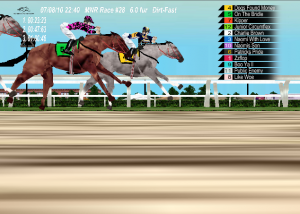 The Odessa Florida Virtual Breeders Association or Team Odessa is managed by Negdog Racing and is relatively new to HorseRacingPark but has already grown to a considerable size, currently boasting thirteen members, ranging from seasoned veterans to the brand new and enthusiastic.

The team is nurturing a fledgling breeders’ program and has a number of sires on their books available for stud duties and their progeny are already finding their way into the winner’s enclosure.

Team Odessa is making their mark on the track too. Away from the big money tracks of Del Mar and Saratoga, if you scan the results of little Mountaineer Park, West Virginia, amongst the ever-present owner names, you’ll start to notice a whole cluster of runners hailing from the yards of Team Odessa members, Negdog Racing, Irishman Stables, Mj Racing.

The WV Secretary of State was the first leg of a quick double for Team Odessa’s Negdog Racing. The event took place over six furlongs of the dirt track for 3yo and up, fillies and mares. There were a number of absentees but the field retained a competitive look with eight runners going to post. Burning Incense came into the race looking to complete a three-timer having made a winning debut for her new owner in July. The four year old Tabriz mare broke slowly but soon moved up just in behind the leader. It wasn’t long before she edged ahead and despite a late rally from the runner-up, Sarah Stables’ What A Treat Av, Burning Incense ran on to score by a nose.

Team Odessa collectively fielded four of the twelve runners in the following MNR Juvenile Stakes, with Irishman Stables adding his last-time-out comfortable winner, Patricks Pride to Negdog Racing’s three participants. Patricks Pride ran respectably without ever looking a serious threat however and it was Negdog’s Dogs Found Money who was to steal the show. Always close to the pace, the homebred colt maintained his unbeaten record to win the six furlong contest going away.

Max Marks Your Card – 7th May