We are now two weeks into the new season at Raceclubs and things are starting to hot up. The second round of qualifiers are now upon us and with one run already under their belts we should now begin to see which of the horses have progressed the most from last season as the contender vie for position at the head of the Challenge Series standings. 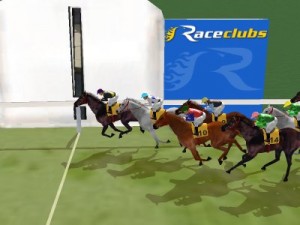 With the Derby Qualifier for 3yo Colts oversubscribed again it was split into two instances and when this occurs I often think it is interesting to note which owners choose which of their horses to run in each. Where owners have multiple entrants it makes sense to split them but with the first instance nearly always the stronger and both qualifying points and considerable cash up for grabs, there are both short term and long term tactics to consider.

Interesting then that Liveoak Stables should decide to take the softer route with his Gentleman Earl who has already taken both a Nunthorpe Sprint Qualifier and a Derby Qualifier since the season began, while Sky Castle Stables nominated four but only his St Leger Challenge Qualifier winner, Dusk Til Dawn represented the owner in the first instance.

As it turned out, Dusk Til Dawn was the only one needed. With the well-fancied El Legendario not having things go his way, Sky Castle Stables’ colt was clear to power his way home from price racing’s Maroon Spirit and Juliassilas’ Amron.

In the second instance however, Gentleman Earl was undone by Unconte Stable’s Slaughtered and the hot favorite could manage only second. Given the owner’s choice of placement on this occasion, you have to wonder whether conditions suited the runner-up today or perhaps he was a little short in his work. Either way, it’s likely that this was not his true running.

The Oaks Qualifier for 3yo Fillies later in the day saw Team Johansson’s Majestic Fantasy put in a commanding performance in an albeit weaker affair. The filly, having her first outing of the season, comfortably outpointed The Outsiders’ Dolcezza with Gissys Nags’ Passion Flower back in third.