With only a single defeat in ten, Shoulder Wheel should have been a very warm order for the Sword Dancer Invitational for three year olds and up over a mile and a half of HorseRacingPark’s Saratoga turf track on Saturday. Perhaps it was that one defeat, in another Grade One under similar firm turf conditions that led to opposition in the ring. 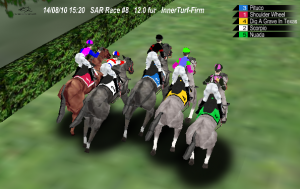 That was also over shorter though and that was the more likely explanation for the blip. The four year old had previously won a Grade Three by six lengths and followed up with a seven length demolition in a Grade Two.  But Boulevard’s Shoulder Wheel knew nothing of the market fluctuations and upheld the form book, albeit in a much tighter fashion than he has become accustomed to of late.

The Sweet Music Man colt broke tardily but always did enough to maintain his rail position. Gradually winding up the pace throughout, Shoulder Wheel had the strongest finish of the quintet and got up close home to win by a head with the progressive Dig A Grave In Texas finishing second.

At Monmouth Park, the feature race of the day was the MTH Oaks for three year old fillies over an extended mile on the dirt. War Paint’s steadily improving Perpetualism filly, Wang Chung, took the Grade Three prize in what was only her second attempt at this level

The other graded event of the day took place at Del Mar in the shape of the La Jolla Handicap, also over an extended mile, on the turf. The Grade Two event went to Trench Bismo from Ken Allan’s stable with Boulevard this time having to settle for minor honors with Out Of Reach.

A special mention must also go to Team Odessa’s Mj Racing who we are informed has notched his 600th winner on HRP’s virtual tracks with Babealicious. Congrats on a remarkable milestone.

Bowser The Choice In Dawn Run