Chrisman Fires In The Winners At Digiturf

Owner Chrisman has, for a long time, been one of the leading players at Digiturf but recently he has become an increasingly dominant force. With Pillbutt’s unfortunate demise there was a vacancy at the head of affairs and Chrisman seems to be stepping up to the plate. 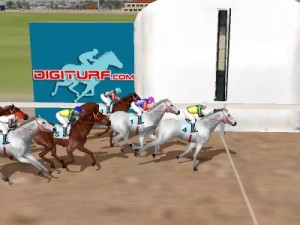 This has been apparent in the auctions as well as on the racetracks but nothing talks louder than results and in the highest grades it is the name Chrisman which has been the most prevalent of late.

On Sunday, qualifiers took place for the older horses over the Classic distances, the Kentucky Derby Classic Qualifier for 4-7yo Colts and the Kentucky Fillies Classic Qualifier also for 4-7yo. In the former, it was Chrisman’s five year old, Mass Extinction who came home in front under John Stewart, ahead of Bigbob’s AP Flame Thrower with Colwells End’s Dublins Lad back in third. In the fillies’ event, Chrisman again teamed up with rider John Stewart to complete a double with Macka Beast who had too many guns for Mudflaps’ Rolex Girl with Ming Ho in the saddle. Enzo Racing’s Heavenly Divine finished third.

There was very little change to the story on Monday either as Chrisman horses were again to the fore in the stayers’ qualifiers. The first, the Arlington Gold Cup Qualifier for 4-7yo Colts saw Chrisman’s horses fill the first two places. His Ap Terminator got the better of the owner’s other runner, Quiet Messiah in a tight finish with Worldwater Stables’ Rule The Planet best of the remainder.

Eventually, a different owner did manage to get a look in as Tri M Fent took the Arlington Gold Cup Qualifier for 4-7yo Fillies with his Divine Liz who is in her final season before she retires to the paddock. You just ca’t keep Chrisman out of it at present though and he managed to fill second berth in the 2850m event with Queen’s Jewel. Worldwater Stables again finished third, this time with Rusty Queen.

Devil To Delight In See You Then