Bank A Juvenile To Note In Digiturf Classic Qualifier

Friday saw the first Juvenile Classic Qualifiers of the season take place over at Digiturf and both the colts’ and fillies’ events threw up notable performances. It may well be early in the season but whatever turns up between now and November will find this pair tough nuts to crack. 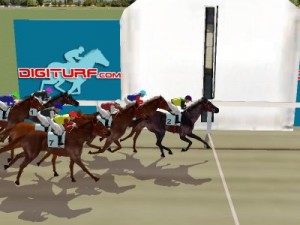 Just when you think Trezza Stables is a spent force, he returns with a bang. With his newly replenished stable now bolstered to more than fifty inmates, he is already firing in the winners at the very highest level. He was represented in the Juvenile Classic Qualifier for 2yo Colts by Rule The Air who was dropping back to this 2400m trip, having only previously raced over 2850m in four attempts so far this season, including when finishing third in the Juvenile Stayers Qualifier last time out. Although this was quite possibly a slightly weak affair for the grade, there was much to like about the way this colt made light work of his four opponents here.

The fillies’ equivalent which took place over the shorter 1800m of America’s muddy dirt track saw an equally remarkable performance but it wasn’t the winner but rather the runner-up that will have been jotted down in many a notebook.

While Chrisman’s filly, Chromium certainly did nothing wrong in scoring her third successive victory in four career starts, it was Gnb Racing’s Bank Note that really caught the eye. Gnb Racing, one of the nicest guys you could ever hope to meet in the virtual horse racing world is a relative newcomer to Championship qualifying grade events but judged on the way his filly acquitted herself here, she was unlucky not to win this event and compensation is surely around the corner.

Nothing fell Bank Note’s way on this occasion but she still managed to take second place with Kiah Bradshaw in the plate and on this evidence she is well up to winning in this grade. Jekegr Stables’ Tabak Especial took third place.

Later on the same card, the Triple Crown Sprint Qualifiers for 3yo took place and these saw the remarkable Chrisman bandwagon roll on as the owner managed to secure both events. Incredibly, this meant that the owner was responsible for the winners of three of the four Qualifiers run on the day.

In the colts’ event, West Gone Black made the most of the weight he received from his nearest rival as he got the better of the Jack Ford ridden runner-up, Black Lotus’ Furstin. The Backstabber finished third for Karl Khoder.

Press Up completed the Chrisman treble as she accounted for the Evil Racing Ltd owned filly, Skyway Avenue with Cepat Kaya’s talented filly Fancy Diva back in third place.