Saturday’s racing at HorseRacingPark.com was an itinerary packed with action of the highest caliber, with Arlington Park, Illinois being the main focus, featuring no less than four graded stakes races and the $1000 AP Million topping the bill. 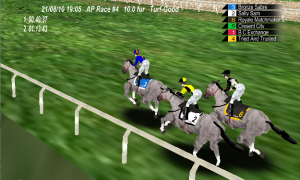 Prior to the three Grade One events came the $100 Grade 3 Stars And Stripes which took place over the twelve furlong turf course. This saw Nakamura Stables’ Materialist take his second graded event in three attempts since joining the owner, having been claimed for $100 from Jerry Garcia Racing.

After this it was Grade One all the way with a triple header of the top tier events. First up was the Secretariat Stakes, run over ten furlongs. The sound surface was fair to all and resulted in a thrilling finish. Race favorite, Rainbow Sox came with a devastating late rattle to get up by a head close home for owner Harrowden, ahead of dead-heaters Oregon Duck and Ludwig Van Beethoven. The winner was completing a remarkable seven-timer, the last five of which have all come in graded stakes.

The action continued to crank up a gear with every race and there was a $750 purse up for grabs in the Beverly D for three year old and up fillies and mares over a half furlong shorter than the preceding event. Seven runners went to post and it was the two fillies receiving a 4lb weight concession from the rest of the field that dominated affairs. Chateau Gill’s Madame Harriet finished best of all to get home a length ahead of Night Mare Racing’s A Little Oblivion with Nancy Grace holding third for Australia Wide.

The concluding event, the feature race of the day saw Bronze Sabre bidding for back to back wins in the $1000 AP Million and he duly obliged, running out a comfortable three length winner. The five year old gray, owned by Maverick Racing and ridden again by C Fraser as he was last year easily beat his five rivals, the remainder headed by B C Exchange for Drabfantasyand Royale Matchmaker taking third for Diablo Diablo.