Sunday saw yet more first class action take place at the virtual racetracks of HorseRacingPark.com. No less than four graded stakes were run, each at a different track. 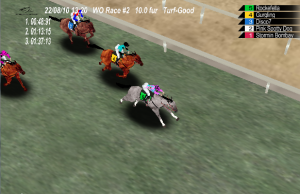 Top of the billing was the Sky Classic Stakes (Gr2) run over a mile and a quarter on the turf at Woodbine for three year olds and up. A total of five went to post for the $250 purse. Sarah Stables’ Rockefella was well supported on this return to very similar conditions that saw him convincingly net the Hirsch Turf Championship (Gr1) at Saratoga last October and he duly obliged. Held up at the back of the field, the five year old gray made smooth progress and once in front forged clear to win readily by a comfortable looking three lengths. Spinetingling’s Gurgling came home second, ahead of Blushing Meadows’ Pink Spotty Dog in third.

Saratoga was the venue for the other Grade 2 event of the day, The Lake Placid over 1 mile and a furlong for three year old fillies. Don Carlos’ improving filly Minke scooped the first prize in this $150 added event. Spinetingling again finished second, this time with Florescent Idea and Sarah Stables’ Roy Acuff took minor honors.

The final race on the card at Del Mar was the competitive looking Bernardo Handicap (Gr3) over six and a half furlongs on the dirt but Jroc Racing’s Hott Pants made light work of top weight and the competition. TwinTowersRacing filled both second and third spots with his pair, Catch The Wind and Term Limits.

Emerald Downs also managed to get in on the graded stakes action this weekend with their feature race the Longacres Mile (Gr3). Everyone at the OFVBA was behind Team Odessa’s Mj Racing. His four year old colt, Blades Speed Talker was one of four that went to post but he could only manage second place beaten one length by Australia Wide’s Jingle Bells. The winner was completing a five-timer, the last three of which have now all come in graded stakes races.