The Challenge Series standings at Raceclubs are now starting to take shape. Most of the main contenders are having their second and third appearances in the relevant event and the tables are beginning to reflect those most likely to be in contention for top honors come finals time at the end of November. 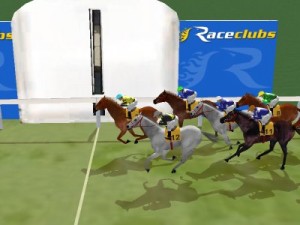 This weekend produced two equally strong-looking instances of the Cesarewitch Qualifier for 4-7yo Colts and a similarly competitive fillies’ event. The colts lined up for their 2850m contest on the England turf track. The first instance produced a return to form for Queen Bee’s Path To Freedom who had previously looked disappointing in two earlier attempts in similar events so far this season. The six year old made no mistake on this occasion however, readily accounting for Green Dale’s Chainsaw who had himself taken a Cesarewitch Qualifier last time out. This second place was sufficient to take Chainsaw to the head of the current standings.

Kingstonne Rule was the punters’ choice for the second instance on the back of his last time out victory in a previous Cesarewitch Qualifier two weeks ago. This time however, Sky Castle Stables’ five year old gray had to play second fiddle to Sweep The Gold who showed he had come on significantly since his seasonal debut to score his seventh career win under Heinz Huber. There would seem to be no fluke about this performance with few excuses for beaten rivals. Liveoak Stables’ four year old looked smart and can go on from here.

The fillies’ qualifier saw shotgun_mike’s Her Excellency put in a commanding performance to secure victory with Kieran Doyle on board. This might well prove to be a weaker event than the colts’ equivalent but the seven year old mare did well to concede 2lb to her nearest rivals, Team Johansson’s Majestic Angel and Sky Castle Stables’ Cerise Miss back in third.

Also run on the same day at Raceclubs was the Classic Challenge Qualifier Juvenile for 2yo Fillies. This resulted in victory for Suicide Squad’s Ruby’s Thunder with She Devil’s She Will Survive following her home.

All Too Easy For Annie In Hirsch