Monday evening at Digiturf saw the best of the three year old stayers take to the track to participate in the Triple Crown Stayers Qualifiers events. The venue was the American dirt course where there had been plenty of precipitation resulting in the prevailing muddy conditions. 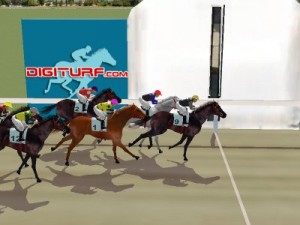 Both the colts’ and fillies events were to be run over 2850m on this occasion and with $200 added to stakes for each and places in November’s end of season Championship Finals up for grabs, there was plenty at stake and all to play for.

The colts were up first and Chrisman’s recently acquired auction purchase, Priscus Of Rome was an obvious choice for the punters. Chrisman will have to wait for another day to start recouping some of that $2499 price tag however as his colt could manage only fifth place.

Top honors this time around went to Evil Racing Ltd’s colt, Count De Money who was securing his sixth career win on only his second start of the season. He got home by half a length under John Stewart from Woodbury Meadows’ Big White Hope in second and Quinones65’s Ap Outta Here finishing third.

Evil Racing Ltd must have had high hopes of completing a quick double in the fillies event with his prolific winner, Countess Bathory facing six rivals. It wasn’t to be though as the filly could only manage third place behind Samster’s Annie Antagonist. Jack Ford’s mount beat Jekegr Stables’ filly, West Of The Pecos in a race which seemed fair to all. Karl Khoder’s Diamond Thunder looked somewhat out of her depth under these conditions while there is better to come from Oto Stables Inc’s Boost Your Stable.