The action continues to come thick and fast over at Raceclubs and Tuesday evening was no exception. It was the turn of the older classic runners to show what they can do and as always these events were well-supported with the fillies’ race filling more than twice over. 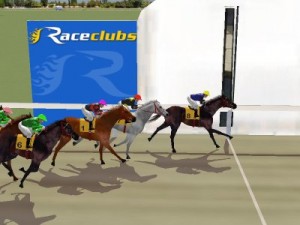 The first instance of the Queen Elizabeth Classic Qualifier for 4-7yo Fillies produced what looked to be the strongest performance of the day. Here, Winning Post’s four year old mare, Heart Of Greed put in a commanding effort to achieve a seasonal best. She appeared to relish this 2200m trip and muddy conditions and in addition was given a peach of a ride by jockey, Charlie Saxon. She won a shade cosily from Sky Castle Stables’ Surrounde. The unlucky in running Queen Of Egypt finished third. Butler’s Yard’s filly showed last time out that she is well up to winning in this grade and currently is our idea of the most likely winner of the Challenge Final come the end of the season.

The second instance, as you might expect, appeared to be the weaker of the two. Jean’s Legacy, out of Victor Consortio’s yard was well placed to win it. She did well to concede 4lb and a beating to her nearest pursuer, Liveoak Stables’ Calumet Honey. Shotgun_mike’s Radiation Vibe may have been a touch unfortunate to finish third and she can be seen to better effect next time.

Victor Consortio pulled off a quick double when his colt came out best in the King George Classic Qualifier for 4-7yo Colts. It might of come as somewhat of a surprise to some with names like Torres Legend, Davy Hill and Public Enemy No1 in the line-up but A New Era was able to make the most of the weight he received to beat all three. Sky Castle Stables’ aforementioned duo took second and third with Wrs Stables’ stalwart in fourth. On this evidence, A New Era would appear to be a better horse over the classic distances than he is in the sprint events. It could also be the case that Victor Consortio’s colt may have improved from three to four.