The Juvenile Stayers Qualifiers were the highlights of Thursday evening’s cards from the virtual racetracks at Digiturf. All the pre-race talk concerned Rule The Air who the owner states will be entered into this weekend’s auction at no reserve. 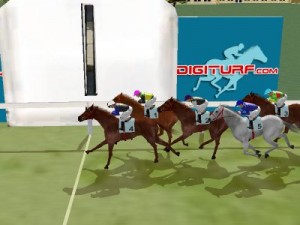 Rule The Air, is of course, the jewel in the Trezza Stables ownership who claims to be closing the barn doors on his Digiturf career and has placed an ‘everything must go’ sign on his auction activity. Regular readers of this column will know that this horse went down in our notebook some time ago. He has now performed with merit at the highest level over both the minimum trip of 1000m and the maximum 3200m. He is sure to be amongst the favorites in which ever events he takes part in come Championship Finals week.

Rule The Air did not have everything go his way on this occasion however and nothing should be taken away from Sunny Future’s Kearsney Kid who came out on top and won fair and square. It is likely that the extreme 3200m trip and the good turf conditions in England suited him particularly well as this represented a marked step up in form on the bay colt’s first attempt in a Championship Qualifier. Rule The Air was a close second with Dakota Celery finishing third for Inxs. Its worth pointing out that Dakota Celery did not get the run of the race here and did well under the circumstances to finish as close as he did under Robbie Pierce. He is a colt to follow.

The Juvenile Stayers Qualifier for 2yo Fillies attracted a slightly disappointing four-runner field but the quality was there and we were treated to an impressive performance from the winner. The filly in question was Cepat Kaya’s My Little Diva. Karl Khoder’s filly Rock Kingdom did her best but not even the able assistance of Jack Ford in the plate was enough to cope with My Little Diva. She ran out a comfortable winner and looks very smart indeed.

Mackeral Can Prove Hard To Catch In Carpenter Derby