It must have been an omen that there were five graded stakes races on Saturday’s card at the virtual Saratoga racetrack from HorseRacingPark.com as Five Fives was to line up as favorite for the main race of the day, The Travers Stakes (Gr1). 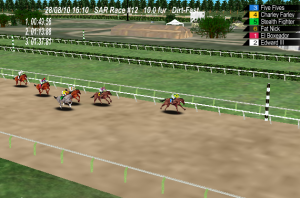 Five Fives had been beaten only once in six starts this year, at the hands of Mrs Bombastic in The Prk (Gr1) back in May when he went down by only a head over a trip probably short of his ideal. Besides that one ‘blip’, the three year old had collected four Grade 1s already – The FL Derby, The KYD, The BEL (which he won by a staggering nine lengths) and last time out in The Haskel. Now he was looking to make it five.

CC Farms’ colt sat in behind the two leaders for the majority of the ten furlong trip and once asked the question by jockey Alan Garcia, he swept past them with ease and steadily drew away to win by a clear five lengths. Yahudi Stables’ Charley Farley who finished second and third-placed Jsl Racing’s Fat Nick were made to look slow in comparison but still collect a sizable chunk of this $1000 pot.

As well as the three Grade One races there was also The Victory Ride (Gr3) over six furlongs for three year old fillies which was won by Rousee’s Jazz Diva from Dynamite Rose and Marta My Dear. Finally, there was The Ballston Handicap (Gr2) which resulted in a win for Pilon Stable’s Freezing Rain.

Chrisman Fires In The Winners At Digiturf