After the final hammer came down on Digiturf’s latest auction, the message from Trezza Stables stated, “I am killing my last 26 horses in the barn. I have no more bonuses and therefore, the game is over for me” and concluded, “I am logging off never to return.” 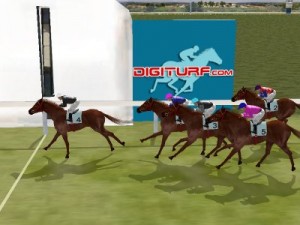 What had preceded was a ‘closing down sale’ of 56 virtual racehorses, 30 of which resulted in completed sales, leaving the aforementioned ‘last 26’. Topping the sale at a whopping $3000 was star of the show, Rule The Air. The two year old colt has so far won two of his nine career starts, including a Juvenile Classic Qualifier, ten days ago. He has also finished second or third in each of his other four starts in Championship Qualifiers to date. Only once has he finished out of the frame, despite running over trips ranging from 1000m to 3200m. He now resides with Karl Khoder.

The second biggest sale might well have been sufficient to top the sales on many occasions. The horse in question was Pool Party who was sold out of the Two Turned Barn and bought by Filante Stables for $2155. Also a two year old, this filly has run three times to date, winning a low-level maiden, having been placed on her first two starts. The balance of her form reads well enough but there is little to suggest she warrants this price tag. We must assume that the buyer is party to information which intimates she has shown much more at home than she has done on the track to date.

The mysterious Filante Stables made one other sizable auction purchase, Domination Doll, a last time out Nursery winner from Trezza Stables for $590. As of today, these are the only two horses currently lodging in Filante Stables although the owner has been registered since 2006, showing 10 wins in 197 starts. The last of these wins came on December 11, 2006.

Cepat Kaya, who remains very quiet, was again very active in the auction this time picking up a further fourteen. The stable is now home to sixty-four and boasts an impressive 24% win strike rate. This weekend, Cepat Kaya spent between $16.50 and $750 on his new inmates.

There were also notable purchases by MudFlaps who went to $1175 to acquire the four year old colt, To The Rescue from Foggydan and by Robert The Great who looks to be making an attempt to move into the big leagues with his purchase of a trio of horses from Fusion Stable for $538.