At this early stage of the season, the divisions of qualifying events we look forward to most from Digiturf are the Juvenile Qualifiers. Some tall home reputations are put to the test, dark horses are unveiled in public and future stars emerge from the new generation of virtual equine athletes. 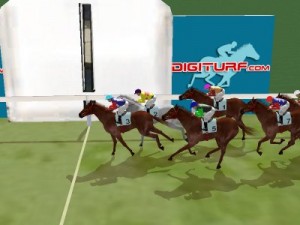 Many of these horses are the latest in a long line of blue-blooded horses to come off the production lines of the big name stables such as Chrisman, Karl Khoder and Worldwater Stables and some have already repaid their breeders many times over by achieving high prices at auction. Every now and then though a lesser known stable turns out a true thoroughbred champion.

Such a horse comes in the shape of Bank Note, a bay two year old filly in training with Gnb Racing. Before yesterday, Gnb Racing had only ever had three runs in qualifiers in a Digiturf career spanning three years and two of those were with this same filly. Two weeks ago we spotted this filly’s potential and judged her a sure-fire future winner of a qualifying race and yesterday she vindicated our opinion by winning the Juvenile Sprint Qualifier for 2yo Fillies over 1600m of England’s soft turf track. She beat The Barbs’ promising gray, Filly The Kid and Cepat Kaya’s Queen Diva to earn Gnb Racing a career record pay out.

Half an hour earlier on the same card, the Juvenile Sprint Qualifier for 2yo Colts took place over the same 1600m of turf. Maple Leaf Farms’ Purple Velvet was the punters’ choice based on his last time out win a Juvenile Classic Qualifier under similar soft turf conditions but over an extra furlong. The once-raced Simply Spiteful from the Black Lotus yard was an interesting entrant having made a very favorable impression in winning his maiden despite not having the best of luck in running. This represented a big step up in class however and he acquitted himself well but the best he could manage was third place behind The Barbs’ Double Yellow and Karl Khoder’s Diamond Crown.

Double Yellow was completing his third win in nine career starts and only his first attempt in this grade. Whilst these events may well get stronger as the season progresses, this black colt looks more than useful and should continue to do well at this level in the coming weeks. Purple Velvet trailed in fifth of the six runners but did not have things fall his way at all today and is better than the bare result might suggest.

Max Marks Your Card – 15th May