In the latest round of Cesarewitch Qualifiers for 4-7yo Colts, three of the major players accounted for no less than eleven of the fourteen runner field. Shotgun_mike was represented by four, Queen Bee also had four and there were three for Sky Castle Stables. 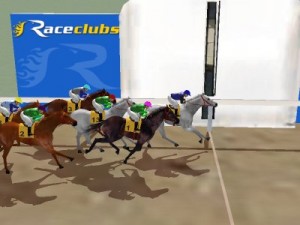 On the face of it, Master Of Doom appeared to be shotgun_mike’s first string. The gray colt had run second in last season’s King George Classic Challenge Final and had already managed a third place finish in a Cesarewitch Qualifier this term. He also saddled seven year old pair, Inspirational and Satans Wrath as well as the relatively lightly raced Apache Dream. Queen Bee’s best chance appeared to lie with Path To Freedom who had won each of his last two starts, both in recent runnings of Cesarewitch Qualifiers. Amongst Queen Bee’s other entrants was Latin Glory, winner of last season’s St Leger Qualifier Final as a three year old but had run far below that level in four previous starts this term.

The fly in the ointment was Winning Post’s Diamond Dust. The five year old gray was having only his second outing so far this season, previously finishing fourth in a King George Classic Qualifier, where he will have been jotted down in many a notebook for doing as well as he did despite meeting trouble in running.

Winning Post‘s patience was to be rewarded here. The colt had a dream run this time under the guidance of Charlie Saxon and after a gruelling 2850m through the mud, Diamond Dust prevailed by half a length from shotgun_mike’s Inspirational with the same owner’s Satans Wrath a further half length adrift in third. Queen Bee’s Path To Freedom ran as if something was amiss and was never a factor at the business end. It would be unwise to right off this classy and he is sure to feature prominently again in the near future.

A second instance of this race produced a one-two for Victor Consortio with King Right Yeah getting the better of Screaming Jet. Rocketman Stable took minor honors with Sunset Millions. King Right Yeah moves up to seventh place in the overall standings on twenty-two points, ten behind joint leaders, Chainsaw and Path To Freedom.

Later in the day, Sky Castle Stables was to gain ample compensation in the Cesarewitch Qualifier 4-7yo Fillies with his mare, Scally Munter. Last time out, the gray had finished a possibly slightly unlucky fourth in a similar event and looked to have a race of this type within her compass. There were some quality fillies in opposition today too, including Sky Castle Stables’ Cerise Miss and shotgun_mike’s Apocalyptic Doom. These two may not have had the run of the race on this occasion but acquitted themselves well nonetheless but it was to be Scally Munter’s day. She bounced off the fast dirt surface to score readily from Burkveen Racing’s Golden Gunner and Hew Matt’s Hew Immortal.

Scally Munter now sits at the head of the standings for the end of season final, equal on points with shotgun_mike’s Her Excellency. Just one point behind is Cerise Miss with one point further back to Apocalyptic Doom.