Some big name horses lined up for the most recent of the Saratoga Sprint Qualifiers, particularly in the colts’ division where Black Lotus and Chrisman had their prolific winners, King Domination and Purple King entered. Two colts which between them have won in excess of $40,000. 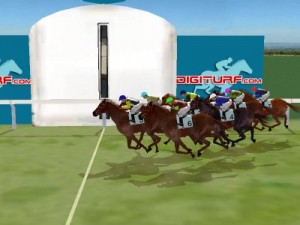 Add Tri M Fent’s Irish Cream to the mix, himself a five-figure earner and already the winner of a Sprint Qualifier this season and looking to complete a four-timer here and we were presented with a race to savor and truly worthy of a $200 added money feature.

Some owners, it seems, are undaunted when it comes to pitching one in against such equine giants. One such owner is McKinleys who fielded a relative minnow in the shape of No Big Secret. McKinleys’ bay was having his fourth outing of the season, managing a second and third place finish from three previous attempts in decent company but there was little to suggest he might spring an upset here. Admittedly, things didn’t go the right way in the race for Purple King and especially King Domination who had a torrid time while No Big Secret received a peach of a ride from Jack Ford but then you need a little luck when you’re in the business of giant-toppling. In the end, No Big Secret nudged out Irish Cream at the wire to record a memorable victory.

The second leg of McKinleys’ double was somewhat less of a turn up. Flyingdiz had finished fourth in last season’s Saratoga Sprint Final and on paper was the equal of anything in the line-up. In fact, bar perhaps one or two, the Saratoga Sprint Qualifier for 4-7yo Fillies was as competitive field as you would be likely to see anywhere.

The one the punters seemed to latch onto though was Chrisman’s Roosters Tango, second in last season’s Saratoga Sprint Championship and already the winner of a qualifier this term. This day belonged to McKinleys though and it was the six year old, Flyingdiz, that came out on top in a tight finish under jockey, Ming Ho ahead of Roosters Tango. Hartman’s Headhunters‘ Well Struck held on well in third. The one to watch from this race could well be Black Lotus’ four year old, Victory Angel who finished fifth here but didn’t get the best of runs and did well in the circumstances.