What makes these Challenge Series races at Raceclubs so great is often more than just the fantastic prize money on offer. Ok, that helps a lot but there is more to it than that. It is about the competition and when the stakes are high, the competition is usually at its greatest. Nothing provides greater competition than an ongoing rivalry between old foes. 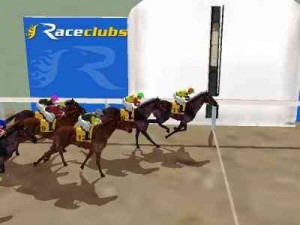 The Nunthorpe Sprint Qualifier 3yo Colts featured two virtual equine athletes at the top of the game, who are no strangers to each other and are both currently vying for the lead at the head of the standings for the series final in November. Gentleman Earl, owned and trained by Liveoak Stables and Darley Arabian hailing from Squeaky Clean Stable have met on numerous previous occasions and both have featured regularly in this column as a result of their fine achievements.

Gentleman Earl has an outstanding three year old record, finishing out of the money only twice in eleven starts this season and winning no fewer than four qualifiers along the way, over both sprint and classic distances. The balance of his form though would suggest he is perhaps stronger over the classic distances than he is at sprints. Conversely, Darley Arabian has achieved a second and two third place finishes in Derby Qualifiers (all three won by Gentleman Earl) but has won two Nunthorpe Sprints including when defeating his rival into third place on August 23rd. Fourth on that occasion and also in the re-opposing was Stardust Racing‘s Toxic Armada, a consistent sort who had subsequently finished second in a similar event.

Fortune was to favor Gentleman Earl today and he eventually prevailed by a slightly comfortable looking three-quarters of a length ahead of RedHalo Racing’s Moloko in second. Darley Arabian got no breaks at all in the race and performed admirably under the circumstances to finish third under Ronan O’Conor. On this evidence, under similar conditions to today’s, Squeaky Clean Stable may well be justified in believing his colt can reverse this result in future. I suspect Darley Arabian is likely to get his chance.

The standings now show Toxic Armada (who finished down the field here) at the top of the table, two points to the good of Darley Arabian with Gentleman Earl now just one point further back.

Last season’s Sprint Challenge Final Juvenile Fillies was won by Flying Fillies’ Shes My Girl and she made an impressive start to her three year old career by bagging both an Oaks Qualifier and a Nunthorpe Sprint Qualifier at an early stage. She had won a staggering ten of her twenty-five career starts to date and coming into the race on a three-timer was an obvious choice for punters’ favorite.

Amongst the opposition for the Nunthorpe Sprint Qualifier 3yo Fillies was Sakhmet, Victor Consortio’s first time out winner of a similar event but had failed to reproduce that level of form since then. Shotgun_mike fielded an interesting one here in the shape of Psycho Sonic Amy. She had won the Consolation Sprinters Challenge at the end of last season but had appeared only once so far this time when finishing down the field.

This was to be a return to form for Sakhmet. She trudged through the mud to great effect readily outpointing Daltons Donkeys’ Lady Of The Race who finished second, ahead of Psycho Sonic Amy. Shes My Girl finished a below par sixth.