An intriguing collection of virtual equine talent went on display for the latest round of the Juvenile Sprint Qualifiers at Digiturf, looking to enhance their reputations as potential future stars of the world’s number one virtual racetrack and significantly fatten their owners’ wallets in the process. 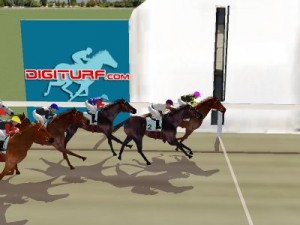 The colts were first to post and they were headed by Paris House‘s Mischief Managed, winner of three races and never out of the money in ten career starts to date, including a third place finish in a similar event three weeks ago. The winner on that occasion and reopposing today was Worldwater Stables‘ Purple Chip. The chestnut colt boasted an even more impressive record, winning four of his eight starts, including that qualifier and had been placed in each of his other four. Splitting the pair that day was Pokerstars‘ Sultan Of Swings. He finished fifth in a maiden on his first start but had gone from strength to strength ever since and his owner must have been hopeful he might be able to reverse that form with Purple Chip. That had been Sultan Of Swings’ only attempt so far at this level and it was interesting that his owner chose to enter him today with conditions identical to the last time. Adding even more interest to the puzzle was the entry of once-raced Starman (JAP), owned by Cepat Kaya. The gray colt was a comfortable winner of a decent looking maiden first time out and his owner has invested enough cash at recent auctions to know what it takes.

The outcome was a fourth victory for Pokerstars’ Sultan Of Swings, ridden today by Claude Virenque. He had too much speed for Mischief Managed, even allowing for the most capable handling of Jack Ford. Bigbob’s Bob’s Gun Bow took third place without looking like he could trouble the front pair.

Sultan Of Swings now heads the standings for November’s end of season final, two points ahead of Mischief Managed. One point further behind, third place is tied between Purple Chip and Karl Khoder’s Diamond Crown.

In the Juvenile Sprint Qualifier Fillies, two fillies looked stand head and shoulders above the rest according to the form book, Cmr Racing‘s Caballo De Oro and Maradona Racing‘s Miss Friday. Caballo De Oro was looking to go one better having finished second (twice), third and fourth in only four attempts in previous qualifiers, over a range of distances from 1200m to the maximum 32oom. Miss Friday loves the mud and had won three of her six starts when the surface was muddy (like it was for this event) including when winning a qualifier three weeks earlier, on her only previous attempt at this level.

These two did indeed battle out the finish and on this occasion it was Caballo De Oro who came out on top, with a little more than half a length in hand at the wire. Miss Friday acquitted herself well here and while this was on her favored ground, there is reason to believe she could reverse placings in the future under similar conditions. Owner, Bigbob ran three in the race and it was one of his trio, Bob’s Cinteelo who took third spot.

Unsurprisingly perhaps, at this early stage, Caballo De Oro heads the current standings for this category, seven points ahead of rival, Miss Friday.