Of all the various categories of qualifiers, few if any, could be more wide open at this stage than the older classic horses that compete for top honors in the Queen Elizabeth Classic Qualifiers. Even now that most of the regular participants have had three or four runs it is hard to pick a standout with any confidence. 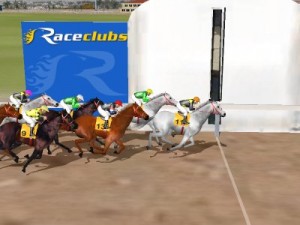 The field on this occasion featured the winners of two previous classic qualifiers this season. The first, Queen Of Egypt finished second in a Consolation Queen Elizabeth two seasons ago but missed all of last term before returning with a bang to win in early August. She followed that up with a third place finish behind Heart Of Greed in another classic qualifier. A key piece of form for this race seemed to center around the other winner, Sky Castle Stables’ Zenzational. She won a qualifier on August 17th where stablemate, Surrounde, finished second and Liveoak Stables’ Calumet Honey finished third. Both Surrounde and Calumet Honey who were re-opposing here, went on to frank the form by finishing second in subsequent qualifiers.

Sky Castle Stables’ third contender today was Centrinette. She had finished fifth of thirteen runners in last season’s Consolation Oaks but had been untried at the top level in four attempts so far this term. That couldn’t stop her though and she took this step up in class in her stride. Her closest pursuer here was Dir En Grey from shotgun_mike’s yard. She was a Consolation Newbury Sprint winner last season but was having only her second start this term. Third place went to Only Fools N Horses’ Liquid Dream who did well here considering she was trying to concede weight to all.

A second instance of this race was headed by The Path Of Death who would have been a warm order here based her last two runs which saw her finish second in a Cesarewitch Qualifier prior to winning a Queen Elizabeth Qualifier just one week ago. This 1800m trip though is probably short of her best. Amongst the opposition was Sky Castle Stables’ Sapphire Moon. The chestnut mare finished a fine third in a similar event first time out but was now looking to bounce back to form having finished stone last on her most recent effort. Another looking to overcome a disappointing last effort was cliff 1’s Grumpo Stiltskin. She had not been seen on the course since finishing in last place in The Oaks as a three year old. Prior to that, she had been in great form winning two successive Oaks Qualifiers.

Cliff 1‘s patience paid off as his chestnut mare scored a notable success here first time up. Shotgun_mike’s five year old, Gods Children came home in second place, just ahead of The Path Of Death. Sky Castle Stables’ Sapphire Moon did not have things go her way here and did well in the circumstances to finish fourth. She might well prove capable of better.

It is tight at the top of the standings for November’s final with Queen Of Egypt and Surrounde tied at the head of affairs on thirty points. Just one point behind is Winning Post’s Heart Of Greed with a whole host of others within easy reach.

Max Marks Your Card – 5th May