Sea Set To Sail In Rakti

Buzz tipsters continue in fine form and from the two betting races at Newturf virtual racecourse on Tuesday evening, we managed to net the exacta in both races, yielding dividends of £11.70 and £33.20 for a £1 unit stake. We have a tough-looking four race flat meeting to tackle on Wednesday and we’ll take a brief look at them all, with the Rakti Derby being our main feature. 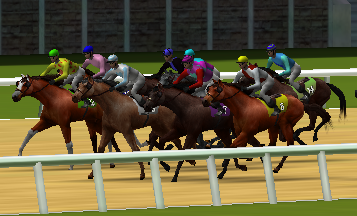 First up we have the Dylan Thomas Derby, an 1800m flat race for seven year old horses. This isn’t the greatest quality race and despite ground that would not be ideal, we expect a race-fit Bal Celebre to collect here. Chief threats could well come from Vent du Nord and Ravissante du Swing but as a betting proposition, this is not a race we would want to get too heavily involved in.

The Rakti Derby looks more interesting and it looks like one has been plotted up for this. Who The Heck and Gris II HN are perhaps the most obvious contenders on what they have achieved so far but both might prefer faster ground and are vulnerable to a more progressive type. Paps Sea is the one I would want to be on in this. The chestnut colt demonstrated he has some quality about him when finishing fourth in a Sprint Cup Qualifier earlier in the season and ever since then, his shrewd owner has been trying to get as many races into him as he can in order to raise his resolution at the business end of a race. This is the only area where he has been lacking and with improvement likely he can upset someof the more established sprinters. The blinkers are on suggesting this is the colt’s main mid-season target. His owner likes a punt too so don’t be surprised to see a market move for this one. It might be worth having a crack at the forecast here too. In this respect, I like the look of Star Dancer. This is an unexposed type, having had just the three runs to date but she has shown ability and a liking for the ground and could give the selection most to do.

The Then Again Derby looks like a match between Soviet Song and Jemchipsa Nightbird. These two can have the finish between them and my marginal preference is for the former but at likely skinny odds, this is a race I will be leaving alone.

The Cape Cross Derby is a bit more interesting. This is an ultra-competitive affair with at least six or seven worthy of consideration. The Breeders’ Cup winner, Baptiste du Corta is the likely favourite and he could well win but I wouldn’t want to be taking short odds about him with so many other quality opponents in the line-up. There is likely to be very little between a number of these and a tight finish is expected but at the likely odds, it might be worth having a small punt on Chomzarik de Nina. In the Breeders’ Cup Qualifiers, on the same ground as today’s, he recorded a time just a fraction behind the very best of these and was unlucky to run into trouble in the final. He should be thereabouts.

You can place a bet here. Betting is open to residents of UK and Ireland only.

Typhoon Blows Them Away in Sprint Qualifier