Owner Chrisman achieved a remarkable feat on day one of the Digiturf end of season championship series by bagging no fewer than three of the six races. 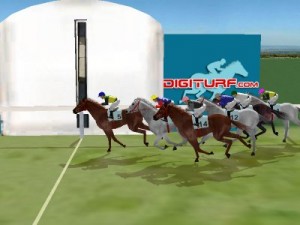 Even more remarkable when you consider he was represented in only five of the opening day events and also produced a one-two finish to the Saratoga Sprint Championship for 4-7yo Fillies with Mystic Goddess and Roosters Tango. Half an hour earlier, his AP Executioner had taken the colts division and as a four year old looks set to be a force to reckon with for seasons to come. Chrisman’s trio was completed by The Situation in the Triple Crown Sprint Championship for 3yo Colts who overturned unlucky in running Golden Lineage, hailing from the Paris House yard, the long-time hot favorite for the race. A performance to note came from Bigbob’s AP Flame Thrower who didn’t have the clearest of paths himself and did well under the circumstances to follow the winner home under Khaled Azzam. In the Juvenile Sprint Championship for 2yo Fillies, Chrisman’s Madam Speaker had to play second fiddle to Languedoc Stables’ Secret Queen, despite the assistance of Jack Ford in the saddle. In the colts’ division, Jekegr Stables’ Rumblin Ryan just got the better of Karl Khoder’s The Backstabber and Black Lotus’ well-touted auction buy, Furstin. The other feature race on the day one card, the Triple Crown Sprint Championship for 3yo Fillies went to Sunny Future’s Rachel Alexander.