Willow Not So Wooden At HorseRacingPark

A competitve looking ten-runner field lined up for Friday evening’s only graded stakes race, The With Anticipation (Gr3) which was the highlight of the card from Saratoga. 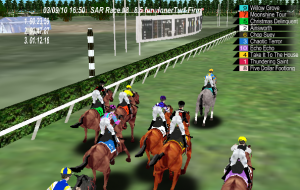 The race which took place over a mile and half a furlong of the turf track boasted a $115 purse and was a fitting climax to the day’s racing as it produced an impressive victory from a two year old very much on the upgrade. Willow Grove, owned by Maletto won his maiden by a clear-cut five length margin back in the spring. The gray colt followed that winning debut with a narrow defeat in an allowance race before returning to winning ways when getting up close home when stepped up in trip to six furlongs last time.

This Grade Three race was another step up again, both in distance and in class but Willow Grove relished the task. Settled towards the rear early, Maletto’s charge made smooth progress before hitting the front around a furlong and a half from home. Willow Grove soon put daylight between himself and the chasing pack as he forged clear for a two length win.

Ainsworth, who was a last time out claiming race winner proved what a shrewd purchase he was by rewarding his new owner, Sheffler Stables with a second place finish. Moonshine Tour did best of the rest for Riggins Racing in finishing third.