I was surprised to see Worldwater Stables put Priscus Of Rome up for sale in a recent Digiturf auction. It’s only when you realize what he has left in the stable that you begin to understand how it is he is able to part with such a talented colt. Of course, I’m sure the $1799 he fetched will have helped to ease the loss considerably too. 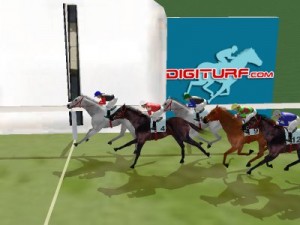 Last season’s Juvenile Stayers Championship winner, Priscus Of Rome was in the line-up for the latest Triple Crown Stayers Qualifier, bidding to recoup some of that price tag for new owner Chrisman. Pitted against him was Secret Smash, his former stablemate, still in training with Worldwater Stables. Secret Smash, already a winner of a similar event earlier this season was looking to rack up his tenth career victory. Maple Leaf Farms’ consistent colt, Great White North, was just one of a number of others that gave this race a highly competitive feel.

It was Great White North who, in the end, gave Secret Smash most to do. Khaled Azzam’s mount almost stole the show but Secret Smash ultimately ran out a half length winner. Sunny Future’s Silent And Deadly produced a seasonal best effort to take third place. Priscus Of Rome found plenty of trouble for himself and did well under the circumstances to finish sixth. He might well pick up one of these events before too long.

Great White North now heads the standings on twenty-seven points, six ahead of Priscus Of Rome. Secret Smash who was having his first qualifying run for this event here, scores twelve.

Worldwater Stables was no doubt hoping to notch up a quick double when his Domination’s End lined up for the Triple Crown Stayers Qualifier 3yo Fillies. The gray filly has been ultra-consistent so far this term, finishing out of the money only twice in eight starts but had yet to net a qualifier. In opposition was Samster’s Annie Antagonist, already a winner of a Triple Crown Stayers Qualifier this season, Jekegr Stables’ West Of The Pecos, already twice placed in similar events and Whymea Farms’ Mass Deception who seems to be exceptional over a broad range of distances.

Domination’s End almost pulled of the impossible. With events conspiring against her practically from the start she did extremely well under the circumstances to get anywhere near the eventual winner, jockey Ted Reynolds deserving a large slice of the blame. It was West Of The Pecos who was best placed to take advantage and she got home by three-quarters of a length. Annie Antagonist stayed on well to take third spot but Mass Deception was never firing today and trailed in a disappointing fifth. She is a quality mare though and it would be foolhardy to write her off based on this alone.

The standings now show West Of The Pecos leading the way, ahead of Samster’s Annie Antagonist just one point adrift. Domination’s End now sits in third place merely two points further behind with all to play for.