A high quality field lined up for the latest Newbury Colts Sprint Qualifier including some of the best well-established names along with some younger talent looking to make their mark in this category. Looking to retain their grip were classy colts such as Daztron’s Sir Sam Silver and Wrs Stables’ Public Enemy No1. Pitted against them were relatively lightly raced types such as Black Death’s Breakneck Pace. 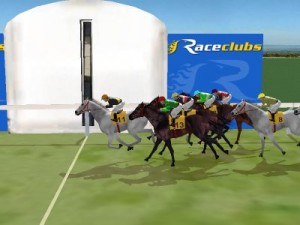 Sir Sam Silver notched up a century of wins in a Level Weights contest last month but as yet had not managed to win a qualifier in four previous attempts this term. It was a similar story for the equally prolific Public Enemy No1 who had yet to win in two. Four year old colt, Breakneck Pace had only had two starts so far this season but both of those were similar events to this one and he had managed a second and fourth place finish.

Trainer Sky Castle Stables seems to save Blood On My Hands solely for these events and its not hard to see why. The five year old gray achieved a fine third place behind Moral Raiser in last season’s Newbury Colts Sprint Challenge Final and he repeated that placing on his single start this term in a previous qualifier. His performance today though was another step up as he completed his first victory in five months. He powered home in front of shotgun_mike’s Imploding Legacy. Third place went to Stable 76’s Juan De Austria. Breakneck Pace finished an unlucky fifth. Judging by this performance he looks capable of winning a race of this nature in the future when things fall his way.

A second instance of this race saw Sky Castle Stables double up with Hours Devours. He came home three-quarters of a length to the good of shotgun_mike’s duo of Ütinam Bárbàrium and New Dimension. The standings for this category now show Breakneck Pace tied at the head of affairs with derekw10’s El Nino Got A Bro. They are five points clear of Imploding Legacy and Sky Castle Stables’ Karaman. Blood On My Hands is now just one point further behind.

Tornado Of Death had as good a form as any in the race having already won one of these events this term but the race had a very open feel to it with several other runners, including Goldikova, Snowbird and Urban Symphony managing to place at this level also. Victory went to Victor Consortio’s The Path Of Fire, scoring for the third time in six attempts since the start of the season. Curiosity Kills filled the runner-up spot for owner, THE OUTSIDERS, half a length shy of the winner and Stable 76’s Goldikova came home in third.

The current standings for this event still show Sunline (NZ) topping the table, an impressive thirteen points clear of her nearest pursuer, heinz‘s Tornado Of Death. Urban Symphony is a further two points back in third. Today’s winner, The Path Of Fire was having her first qualifying run here and now comes into the reckoning with twelve points to her name.