The action is coming thick and fast from Raceclubs these days with Monday evening being no exception. Again, the qualifying events were over-subscribed spawning multiple instances in some cases and plenty for the spectators to enjoy. 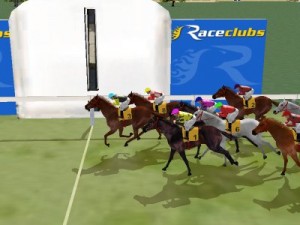 First up was the Nunthorpe Sprint Qualifier for 3yo Colts. On the face of it, this was looking like a match between Liveoak Stables’ triple qualifier winner, Gentleman Earl and the consistent Darley Arabian, third to that rival in a Derby Qualifier last time and hailing from the Squeaky Clean Stable. On this occasion it was to be Darley Arabian under Heinz Huber who was to come out on top. It has to be said though that Gentleman Earl did not get the best of passages in finishing third and it wouldn’t come as a surprise to see this form reversed next time. Kopites’ Shankley Shankley split the pair in second.

A second instance of this race remarkably saw Sky Castle Stables fill the first three places in a field of seven. His Star Watch came out best ahead of Wizzimo and Dusk Til Dawn. Dusk Til Dawn is likely to do better when returned to race over further.

The Nunthorpe Sprint Qualifier for 3yo Fillies saw another hot favorite overturned as Flying Fillies’ Shes My Girl had to play second fiddle to The Reebok’s Kung Fu Kimmie. She Devil’s Bright Horizon finished third in a race where there were few excuses.

The older sprinters took to the track next and both the colts’ and fillies’ events managed to produce two full-sized field instances each. In the first of the colts’ events, Sky Castle Stables managed to take first and third with his Shade and Blood On My Hands with heinz’s The Enemy Within living up to his name and plugging the gap. Daztron’s Sir Sam Silver ran disappointingly down the field over a trip which is perhaps stretching his best. The second instance went to Black Death’s Out Of Orbit with shotgun_mike’s Utinam Barbarium and Holmang Horses’ Speed Is My Name taking minor honors.

Finally, in the first of the fillies’ events Winning Post’s Flowery Twats surprised a few by besting better fancied rivals Sky Castle Stables’ Sunline (NZ) and The Face’s Viva Forever while in the second instance, Burkveen Racing’s Flouncy Flouncy took the lion’s share of the $200 added purse under Kieran Doyle. She was followed home by shotgun_mike’s Weeping Angel and Team Johansson’s Majestic Miracle came in third.

Chine Set To Shine In Starluck